Respond to your Calling

Between Days 4-8 after menstruation starts, the reward centers of women's brains were highly activatable. Estrogen is unopposed by progesterone at this time of the month.
-Berman (2007)

Progesterone levels are lowest during this part of the cycle, and low progesterone is associated with enhanced ability to recognize emotions in others.
-Derntl et al (2008)

Power Posing Works:
When people pose in such a way to take up more physical space, they are perceived as more powerful, and subsequently become more powerful.
-Carney, Cuddy, Yap (2010) 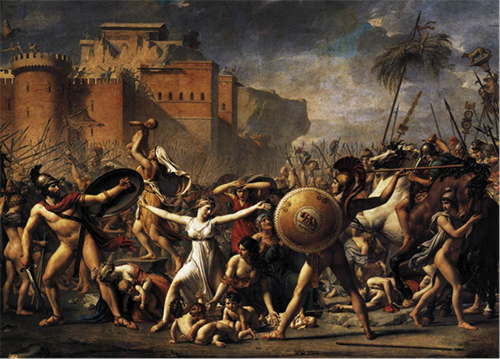 The Intervention of the Sabine Women by Jacques Louis David

This painting shows the Sabine women doing what women do best in the first week or two of a natural cycle. They display a constancy of purpose toward a project that might seem insurmountable (like getting high-T men to retreat from conflict). After all, in the last week of the month, when willpower and persistence can be compromised, this might not happen. The female figure, Hersilia, tries to keep her Roman husband and Sabine father from killing each other. Hersilia’s pose recalls the Nike of Samothrace to imply that she will triumph. More than a history painting, this is a portrait of the female power to mediate, to broker reconciliation, to halt men from doing something stupid.