At ovulation women are more inclined to see other women as the competition, but only in their local environment--not with women thousands of miles away.
-Durante, Griskevicius et al (2010)

Women make more eye contact with male strangers. They look not to learn but to signal interest. Signals include direct eye contact, outstaring, fixing the gaze on the target male then breathing synchronously.
-Grammer (1989)

Women are more receptive to men now. During the ovulatory part of their cycle, women were more likely to give their phone number to random male strangers who approached them in a park.
-Guegen (2008) 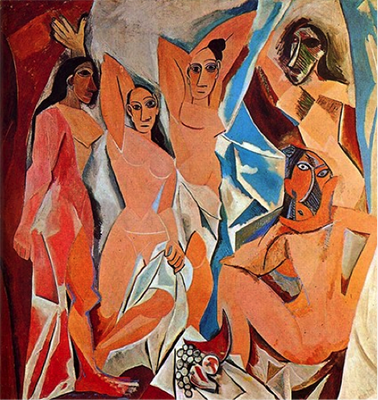 In Les Demoiselles d'Avignon, which Picasso called “my brothel,” the women are irrelevant to each other. Even the picture plane doesn’t want to accommodate that many of them. Whether they’re prostitutes or just intent on mating, these women demonstrate that greater eye contact is not for the purpose of collecting information, it is for the purpose of signaling interest.

As art critic Leo Steinberg points out, “Their gaze on us is stronger than our gaze on them.” On an 8’ x8’ canvas, les demoiselles are supersized. Which is how women at that time of the cycle sometimes feel—like they can do it all. Hence estrogen’s reputation as the feel-good hormone, the empowering hormone, the hormone that bestows a natural high.