Warning: High Estrogen May Cause Cattiness

Women during fertile days put down the competition, ranking other women as less attractive during the very phase when their own reproductive stakes are high.
-M.L. Fisher (2004)

An ovulating woman is more concerned with relative status, how she ranks compared to the other women in her group.
-Durante et al (2008) 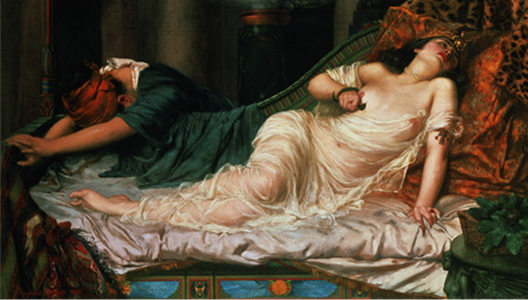 “Age cannot wither her, nor custom stale.
Her infinite variety. Other women cloy.
The appetites they feed, but she makes hungry."

Cleopatra has infinite variety: never the same hot fox, always a different hot fox. Other women are irritated by Cleopatra’s sex appeal. And while men eventually tire of other women, they always crave more of Cleopatra. She is forever alluring, she’s always reinventing herself, she makes other women chafe. In short, she is like a woman who is always ovulating. Even in her death, as depicted in The Death of Cleopatra by Reginald Arthur, she climaxes.