No Twist, No Shout

Why She Looks Inactive

In the week before menstruation, there is a decrease in isometric strength, aerobic capacity, and endurance. In surveys of female athletes, the worst performances occur now. High progesterone levels could be the culprit.
-Lebrun (2012)

Why She Looks Cold

During the luteal cycle (last week before her period), a woman has more difficulty with thermoregulation.
-Frascarolo (1990)

Why She Looks Depressed

In a study of 1086 women, 92% report at least one symptom of PMS and 70% report several symptoms. The most common are irritability, sadness, anxiety, and swelling.
-Andersch (1986) 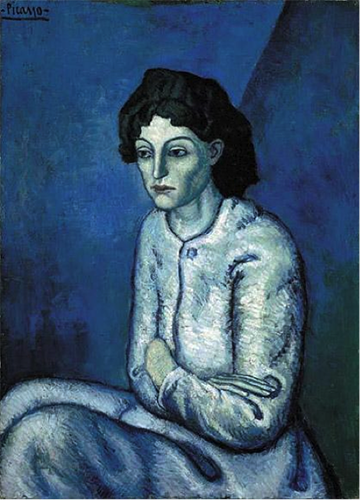 Picasso’s Femme sits heavily, like she’s rooted in place. Compare her with Vermeer’s girl from the flowering phase, especially the turning effort in her pose. Picasso’s woman emits a real PMS solidity, wearing her dress like a blanket and crossing her arms self-protectively. She looks inactive, cold, and depressed, a few of the many symptoms correlated with the week before menstruation.